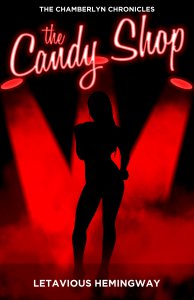 The Candy Shop is an urban drama set in the fictional city of Chamberlyn, New York. Jordan Jones is a young black woman who is the object of many a man’s fantasy is working hard to finish college during the day and as a stripper at night for The Candy Shop Strip Club to provide for her three year old son, Grey. With very few friends to rely on and a basically nonexistent family she’s become skeptical of the world, and very cut off. She wears sarcasm and a bad attitude like body armor as she deals with the criticisms of the world. The father of her child is a successful lawyer who is more underhanded than he seems to the public, and he’ll stop at nothing to achieve his goals. But a messed up family and a demented baby daddy are the least of her problems as a new sinister figure moves into town to take over the seedy underbelly and sets his sights on her. Sex, drugs, and danger leave very little room for love, but even love finds Jordan Jones in Chamberlyn, New York. Welcome to The Chamberlyn Chronicles